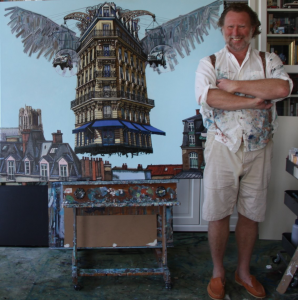 Born in Russia, living and painting in Stockholm, Sweden.

From an early age he liked to draw and at the age of five he was accepted as a student at The Children Art Studio at the Hermitage Museum. He successfully graduated at the age of 13. Three times during his scholarship he participated at “We are drawing in the Hermitage” exhibitions. Later he studied at the Russian art academy ‘Imperial Academy of Art’, also in St. Petersburg.

Alexei Svetlov is deaf, but this has not been a handicap for his art. On the contrary, his art has developed in quaint directions, which makes the experience of his works quite unique. Through his works Alexei Svetlov invites viewers into a surreal, futuristic and imaginary world, where huge apartment buildings, trams, and railways are with ease suspended on thin wires. It is a strange world; a world where irrational situations play out in places that allow for a certain degree of familiarity, but also in places where this familiarity is challenged with humour.

In 1987 he graduated from the Political Technicial School in Pavlovsk-Petersburg, where he became a professional art decorator. At the same time he attended the studio of the artist I. Suvorov at the Academy of Arts and Design.