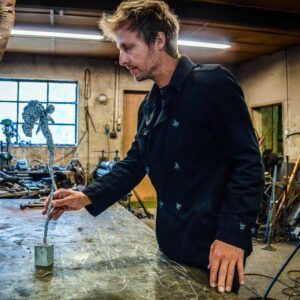 Arne-Johan Rauan studied sculpture and painting at Mølla School of Fine Art (NO), under the guidance of masters like Geir Yttervik, Jan-Erik Beck, Barbara Czapran and Edgar Ballo.

After finishing art studies, Rauan began experimenting with iron and its exciting flexibility. His sculptures is semi-abstract and often mythical and organic in expression, which contrasts with the tightness and the hardness of the material.

His sculptures are part of a series called Tear Me Apart, which is something he has been working on for the past year. This study reflects emotions and how we expose ourselves to obtaining recognition or affirmation in other people. Rauan’s technique is kind of a “peeling” process where he wants to achieve a balance between the absence of mass or the negative space, and the concentrated reduction. The contrasts create focus on what remains, and tell a story of strong emotions.

Rauan melts, builds and forms the metal using a technique that consists of a reaction between iron, copper, gas and electricity. The sculptures get their unique, dry and lava-like surface in the second part of the process, which is a combination of clear paint, pigment and compressed air.