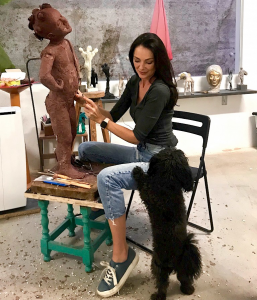 Kari-Lena Flåten (1972) is a Norwegian artist, born in western Norway. She is currently living and working mainly in Malaga, Spain. She studied Art and Design in Lund, Sweden and Sculpture at Central Saint Martin, London, after her degree in «children’s welfare» from Oslo Metropolitan University.

Kari Lena gets her inspiration from interacting with people, mainly children who´s strength and vulnerability often are exposed at the same time. She works with sculpture, painting and graphics. Her bronze sculptures are casted at CAPA Esculturas in Madrid, the same foundry used by Salvador Dalí and Manolo Valdes. Her sculptures are casted in limited editions, never exceeding 8 of each sculpture.

“I admire the children´s strength and strategy to survive. They stand so strong and fragile, at the same time. This I try to capture and recreate, as to shape a voice of the children.”

Her art has been exhibited in Norway, Sweden, Denmark, Italy and Spain. Over the past 10 years, she has exhibited her works at HM Queen Sonja´s Art Hall Oslo, Sammer Gallery, Puerto Banus, Marbella, Efetto Arte in Rome, Italy and numerous exhibitions in cooperation with galleries representing her, in Norway, Sweden and Spain. Her art has been purchased by several public institutions, both in Norway and Sweden. Kari Lena is currently represented by Galleri Ramfjord in Oslo, Norway.