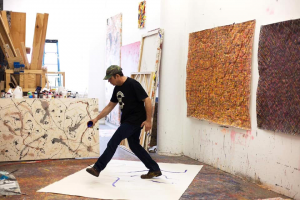 Johan Wahlstrom (1959) was born in Stockholm, Sweden, and is a fifth-generation artist.

Though art was in his blood, his first creative direction was rock and roll, where he had a successful and long career as a keyboardist and singer, touring with Ian Hunter, Graham Parker, Mick Ronson and many Scandinavian artists. After 20 years, the rock and roll life caught up with him. Wahlstrom moved to a small village in France where he did nothing but paint for seven years, part of that time under the tutelage of Swedish artist, Lennart Nystrom. Wahlstrom’s dark narrative paintings of heads and torsos in acrylic and ink are inspired by cryptic, often ironic social critiques that he collects on scraps of paper in his studio in Jersey City, NJ, USA, where he now lives. Wahlstrom’s graphic, neoexpressionist style is inspired by Jean DuBuffet, Paul Klee, Jackson Pollock and Jean-Michel Basquiat.