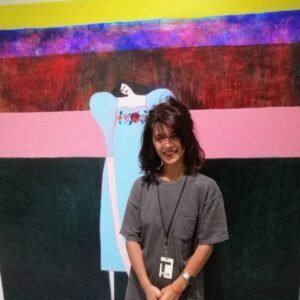 Mai Lashauri (1986) graduated from Tbilisi State Academy of Arts in 2009 before embarking on a career in arts and painting.

The young artist has been distinguished with the Outstanding Talent award at the 2015 Al Asmakh International Symposium of Art in Doha, Qatar.

Her solo exhibitions have been hosted at venues including T.G. Nili Art Space gallery and TBC Gallery in Tbilisi. Lashauri’s artwork has also been featured at group displays at the Beijing International Art Biennial and MH Art Gallery in Bilbao, among other galleries. Lashauri recently exhibitied at Beijing’s National Art Museum in China.