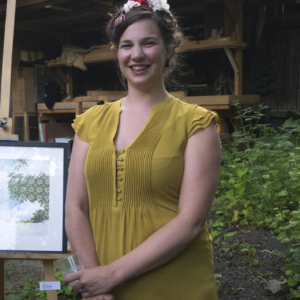 Era Leisner (born 1988 in Norway) had from her early youth passion for drawing and painting. After finishing high school she was invited for a residency at the Jan Matejko Art Academy in Krakow, where she attended classes led by professor Zbigniew Sprycha. She was later accepted to Edinburgh College of Art where she studied fine art, and after returning to Norway she got a BA in art history. She also studied illustration in Gothenburg, before embarking upon her career as an artist in Oslo.

Her body of work consist of both paintings in oil and acrylics and drawings and the motifs are based upon the friction and interaction between humans and nature. Even though the style is figurative, the paintings often have a surreal quality, sometimes combined with ornamental backdrops or symbolic motifs.​