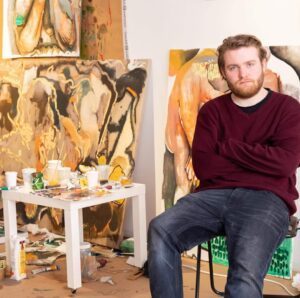 Olav Mathisen (1990) is a Norwegian artist from Lillehammer, who is rapidly gaining international acclaim. Following his debut sell-out solo exhibition at Galleri Ramfjord in 2014, his first US showing at SCOPE MIAMI Art Fair in december that year, resulted in numerous international collectors and a 14 page spread in EyeSin Magazine. In the summer of ‘15, he had an artist-in-residency space at Mana Contemporary in Jersey City, where he made 10 new paintings, which were shown in Miami later that year. Half of these were sold to an Istanbul art collector, and some were added to the permanent collection at Mana Contemporary. In 2016, Mathisen finished his Art Academy degree in Bergen, and did a mural at Bogerud in Oslo, which has gained a lot of attention on-site and on social media. His fifth solo exhibition in Galleri Ramfjord shows the artist at his most playful and experimental.

Mathisen works mostly with oil and egg tempera on canvas, using a variety of techniques ranging from abstraction and thick pastose strokes, to more detailed figurative painting conversing on the same surface. His subject matters revolve around the human condition and the subjectification and objectification of “the self” in constructed situations.