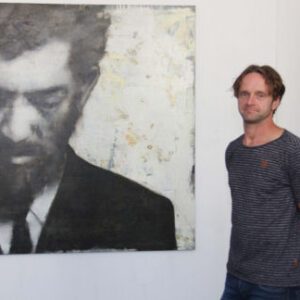 Kai Savelberg’s (1975) dissects the world that surrounds him in his pictures and turns the protagonists into his actors, companions and representatives.
His dialogue finds echo both in his pictures and sculptures as well as in his texts. Portrait, figure, interior, landscape, still life and architecture are united in aartistic creation that lives from structuring and damage to the painting surface, into which he collages a variety of materials. The artist, born 1975, repeatedly translates his visual language into sculptural works, objects and installations.
Kai Savelsberg is represented internationally by several galleries. In 2011 he received the Johann-Isaak-Von-Gerning Art Prize.
His pictures and texts have been published, for example in “Zwiesprache” (2008), in “Und von vorn” (2012) and most recently in the book “Stille Post” (2020).